1. BE PATIENT, GIVE ME TIME

How many times did a man ask for your patience? And how many times did you believe him? If there is something that I have learned the hard way is that men and women don’t have the same notion of time. The word « patience » in a man’s mouth is a pure lie. You should know that men only ask for time when they are not ready to commit with us. If he’s not ready to commit with you today, he won’t be tomorrow. He needs you to be patient because he knows deeply that he can’t invest himself emotionally. But he also knows that he can’t afford losing you because you provide him emotional safety and stability. So he makes you wait. He makes you believe that he takes love very seriously so he needs time to figure it. Well, he is lying onto your face. When a man wants a woman, he makes himself available. But when he’s not, he spreads lies. For men, asking for time is the best way to get the cookie quickly.

2. YOU ARE TOO DEMANDING

When a man wants to take advantage of a woman, he tells her that she’s too demanding.  For me, this phrase a (soft) form of gaslighting. Excepting having fun with you, he doesn’t want more. He’s not craving for something serious, he’s not like you. So, from his point of view, why would he give you more? When a man tells you that you are too demanding, you should run. It is again another dating lie. Never trust a man that thinks setting rules for yourself is something extra. Never trust a man that makes you think that respect is too much to ask. Men that have nothing to bring to the table say that women are too demanding. Don’t make the mistake to lower your standards, just run away. You deserve emotional reciprocity. And if, that is too much to ask, then tell him « boy bye ».

3. HE WANTS NOTHING SERIOUS BUT HE IS STILL READY FOR « THE ONE »

Sister, this lie is evil. I hate this one so bad because it just doesn’t make sense in my head. If he truly is ready for « the » one then why would he want nothing serious? I don’t get the point, you know why? Because there is nothing to understand. This is a dating lie, lies don’t have to be logic. If a man tells you that, it means that he just wants the cookie. And if you think that you can make him change his mind, you are definitely stupid. Don’t listen to your ego that is actually fooling you. He won’t change for you. This man wants sex, he does not want you differently. He is not thinking about having something serious with you because into his eyes you are not the one for whom he would change. I know that it’s hard but that’s the truth. This type of mindset is not made for dating but for hooking up. If a guy does not want something serious with you then you should not take him seriously. I don’t care how persuasive he is. You will never be the one for him because he is only looking for sex.

4. I AM DONE PLAYING AROUND NOW I WANT SOMETHING SERIOUS

This type of mindset is very tricky and you should be careful.  In some cases, this may be true but for me, it is nothing but another lie and let me tell you why.  When a man wants something serious, he makes it very clear. A man who desires a formal relationship will never say something that will jeopardise his real intentions. Moreover, as a woman, you don’t need to know that he has been sleeping around. For me, this phrase is a little TMI. According to me, this is dating lie because it’s a way for men to get the girl to invest herself into a situationship. Don’t get fooled by men who sound sincere because most of the time, they just end up being better liars… I would say that they are not done playing around, they just want to start playing you. Another red flag would be that after he told you that he acts differently or comes up with other excuses…

To conclude, it’s very easy to understand that the big majority of men only want to hook up. The sex culture has impacted the quality of our relationships with the opposite sex. In our days, it is harder to find someone who wants to commit and invest emotionally onto someone else. Because these four big dating lies about meant to have sex with low efforts. I think that you should read more about how to manage a sexfriend relationship, (just in case…).

Please, tell me about your dating experience and the lessons you learned the hard way. I also invite you to join The Private Zone where I share more about my intimacy. 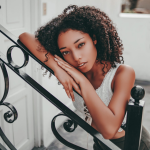 Thank you for reading this post, I really appreciate it. I am Leslie, a young French girl very passionate about love and relationships. With you, I share on my posts my thought these topics. I also have a podcast called The Private Zone where I share my intimacy. As a blogger, I value your time and the efforts that you guys put on commenting on my posts. Thank you from the bottom of my heart.